I have always loved reading fantasy. The Chronicles of Narnia, The Lord of the Rings, and The Wheel of Time were the series that defined my childhood. (Well, Wheel of Time lasted longer than my childhood. Robert Jordan passed away while I was in college.) Since then, I’ve enjoyed the works of Brandon Sanderson, Sarah J Maas, George RR Martin, Sabaa Tahir, and more. One of the best parts about reading fantasy is opening up one of those doorstopper volumes to admire the map. When I started my Steel & Fire series, I was excited to finally create my own fantasy map.

I knew the shape of my main kingdom early on. Vertigon is a mountaintop realm with three distinct peaks: King’s Peak, Village Peak, and Square Peak. A multitude of bridges span the gaps between the peaks, providing all kinds of opportunities for cool scenes. While I worked on the rough draft of the first book, Duel of Fire, I slowly expanded on my ideas for the world outside Vertigon. I knew there was a distant land called Pendark, with a turbulent past and a magic substance distinct from the Fire of Vertigon. Trure was Vertigon’s closest neighbor and ally. Soole was as far away as–and even more mysterious than–Pendark. Eventually these ideas developed to the point where I needed to figure out exactly where these places were located before I could finish the first book and plan the next one.

Once I knew enough about the world in my head, I went straight to YouTube. I found a wonderful video series about how to create your own fantasy map. You can find the videos here. I laid out all my favorite fantasy maps for reference and inspiration and got to work, following the steps in the first few videos closely. 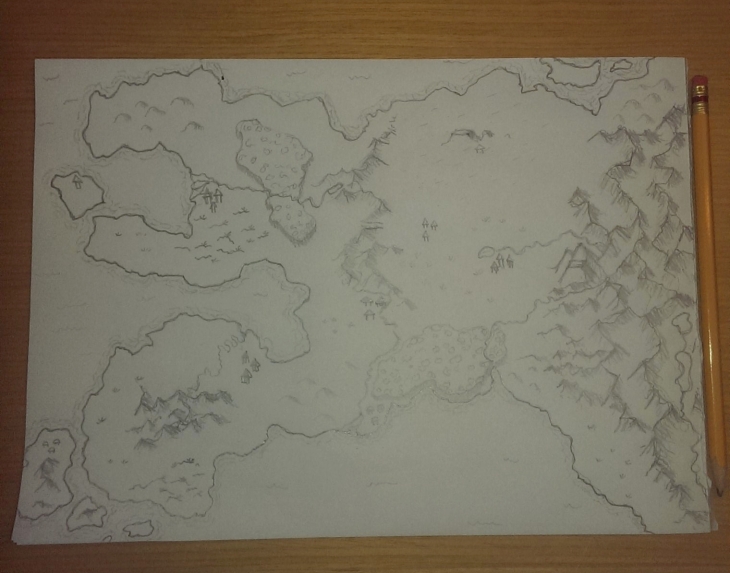 I did the initial drawings in pencil and worked through several versions in increasing detail. I also sketched the rough shape of other continents in the world, which I may or may not explore in a future series. They’re referred to only as the “lands beyond” the Bell Sea and the Ammlen Ocean in the series. When I was satisfied with the design, I went over everything in darker pencil and wrote the place names by hand.

At that point I scanned the pencil drawing and used Gimp (a free and less powerful version of Photoshop) to darken and smooth out the lines. I also decided to erase the rough hand lettering and replace it with typed names as it gave me more options for changing the size and adding in place names later.

I decided not to label every town and river from the beginning. My characters don’t leave Vertigon until Book 3, so that was when the details of the rest of the continent became more important. I’ve slowly been adding to the map with each volume. For Book 3, I zoomed in on Trure and added additional details as the different roads are important in that novel. Otherwise, I preferred to stick with a fairly clean design with only cities and natural features included. 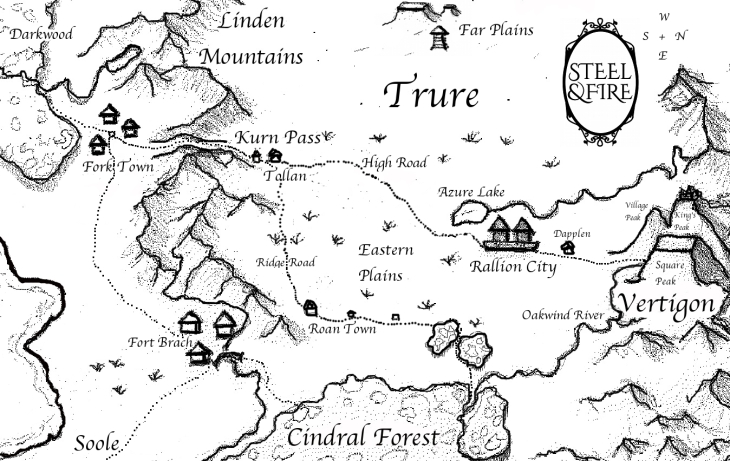 The Steel & Fire series is now complete and with it the final version of the map. I am now in the planning stages for an all-new series set in a different world. This time I’ll do more work on outlining the complete series before creating the map. There were times when it would have been convenient for the continent to be shaped differently or for distances to be shorter than they were in my map. I’m hoping to avoid some of those issues the next time around. (I also made the mistake of orienting the map so that west is at the top and north is on the righthand side. I’ll definitely stick with a traditional compass next time around for simplicity’s sake.) I’m already looking forward to building my next world!

So, what’s your favorite fantasy map? Have you ever tried to make one yourself?

Don’t forget to pick up your copy of Night of Flame (Steel and Fire Book 5). It just launched this weekend. Happy reading!