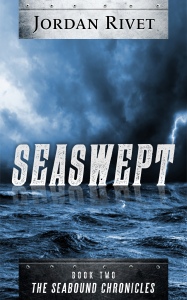 It’s official. Seaswept, the sequel to post-apocalyptic adventure at sea Seabound, is now available on Amazon! This book has even more twists and turns, more sea battles, and more heart-stopping adventure than the first one. I hope you enjoy it!

I hit the publish button on Friday night (HK time), and it’s already on the bestseller lists in Sea Adventures and Women’s Adventure Fiction. You can find it on the Hot New Release lists for Dystopian and Post-apocalyptic fiction too!

The paperback will also be available on Amazon, Barnes & Noble, and more in a few weeks. Stay tuned!

Sixteen years ago, the Yellowstone volcano erupted and changed the world forever. A small group of survivors escaped on a cruise ship called the Catalina ahead of a choking cloud of ash. Since then, they have been surviving at sea, drifting until the land becomes safe again.

The adventure continues in Seaswept, the heart-stopping second book in the Seabound Chronicles.

After her triumphant return to the Catalina, Esther begins developing a new way to produce energy. Meanwhile, the exiles from the Galaxy Flotilla, including the enigmatic David Hawthorne, struggle to find their place aboard the Catalina.

When Esther makes a major breakthrough, David offers to sell her technology for supplies and alliances for the Catalina. They dock with the Amsterdam Coalition, where David’s bidding war soon takes a dangerous turn.

How far will Esther go to rescue him? She’s still not sure whether she can trust anyone on the post-apocalyptic ocean—even David himself.